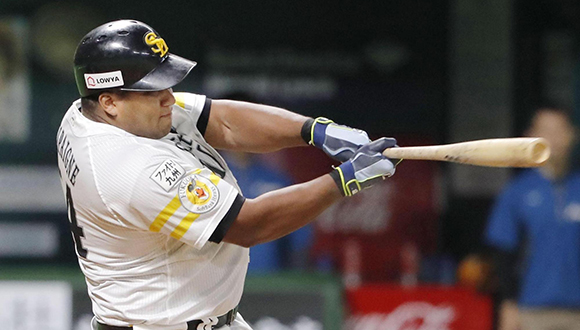 Photo: Taken from the official site of Japanese Baseball.

He pulled the ball into one of his three bats from Rakuten Seimi Park in Sendai. On aggregate he scored three runs to contribute to the SoftBank Falcons’ 6–2 win over the Rakuten Eagles.

The Granma slugger, who already has two home runs, seven RBIs, four runs and five runs in the games he has played this week, has raised his average to .263 and his total RBI to 36.

His compatriot and teammate Eurisabel Gracial took a sip, dropping his average to .272.While fellow Cuban Livan Moinello dismissed all three batsmen he faced in a perfect innings of relief.

Also on this day, at the Ventlin Dome in Nagoya, Cuban Ariel Martinez doubled, driving in three runs and receiving a ticket to order the Chunichi Dragons’ 8–0 victory over the Yakult Swallows.

Matanzas’ outfielder, who had not scored since September 10, maintained his average at .283 and increased his RBI total to 23. Dayan Viseido scored 1-for-4 with one run and averaged . 289.

NPB Central League rule Yakult Nigel with 73 wins, 54 losses and two draws. The Pacific League is led by SoftBank 70-58-2. The post-contest season (Climax Series One) will begin on 8 October.

(with information from JIT)